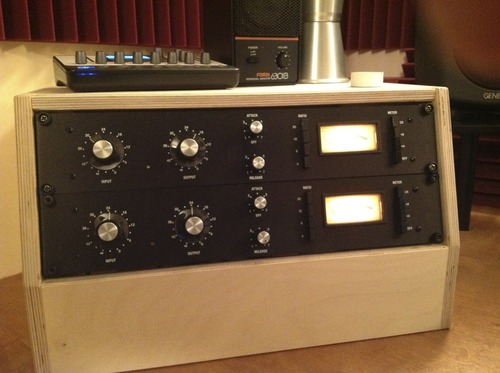 To Buy or DIY?

I have lusted after UREI/UA 1176 FET compressors all my music tech career. They are one of the compressors that is name-checked more than any other and seem to be a go-to for many engineers – with good reason: they have an ability to go from transparent glue to all-out pumping madness with just a few small changes to the setup and impart something magical to whatever you use them on – even when bypassed.

So how to satisfy my lust for a unit that costs around £2K per unit? Many people seem to think that the UA re-issue units haven’t captured the magic of the original units – but trying to find one of them is like finding hen’s teeth! The only other option were the Purple Audio MC77 clones, but they still stack in at around £1200 each – and let’s face it, one is never going to be enough……

So I decided to set myself a challenge – I would build a couple.

There is a great Seattle-based company call Hairball Audio who will supply you with a chassis, pots, switches and all the transformers – input, output and power. All you then need is the PCB – designed by a guy calling himself Mnats, and the components. Handily the Hairball site has a BOM (bill of materials) link where these can all be bought very easily.

The only thing left for you to do is then build the compressor – stuff the PCB with the components (practice your soldering first!) and wire the unit up.

The first of my Rev D boards took me about 4 days to complete but the second only took a day and a half as I was much more confident the second time around.

And the cost? The first unit obviously came in a bit costlier than the second as I needed to purchase hookup wire, heat shrink etc but I reckon the 2 units cost me around £400 each – not a bad saving!

So how do they sound?

My benchmark for comparison are the Waves Audio CLA plugins modelled on the Chris Lord Alge compressors and an AB between the two? Well I couldn’t hear much difference when I matched the level – obviously the sound changes a lot depending upon how the pots are set – remember this isn’t a normal compressor setup at all – but I could get a very similar sound indeed with the hardware units. the main benefit is that I can track with them very easily and save some CPU come mix time…

Well I’d ideally love an LA-2A clone and I have seen some LA-3A products out there and more importantly I wouldn’t be daunted about picking up the soldering iron again. My advice to you? – Give it a go – you’ll (hopefully) end up with a unit that has a unique sound and you’ll learn a lot along the way!