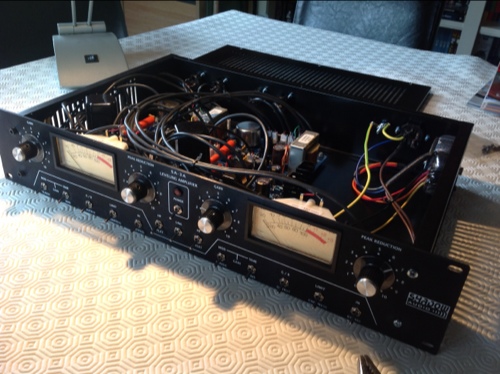 Threecircles Recording Studio is now the proud owner of a stereo LA-3A compressor clone – the Serpent Audio SA-3A. This is a unit based on the revered levelling amplifiers originally made by UREI and now released by Universal Audio. We have various plugin versions of this famous compressor, most notably the Waves CLA-3A from Chris Lord-Alge and also Universal Audio’s own emulation on our UAD 2 DSP processor card.

“So why build a hardware version then?” I hear you ask…….

Well, first and foremost, it allows me to track instruments through the unit, adding tone and vibe on the way in. Secondly the LA-3A tends to be one of the plugins I use more than any other – it does wonderful things to guitars – so now I can save lots of time getting the sound I want on the way in!

The build itself was fairly straight forward – two PCBs, the majority of the  components and the faceplate all came from Serpent Audio in the USA. The hardest part was waiting for everything to turn up: the rest of the chassis came from www.cutterweldermaestro.com, as well as a matched stereo pair of T4B optical attenuators from Kenetek Audio. I also needed to get some decent 22 guage hookup wire, 14 switches, an LED and the pots and VU meters from the guys at Hairball Audio.

Once everything arrived and import taxes were paid – the only real annoyance of not being able to easily source some of the parts in the UK – I went about stuffing the PCBs with the components:

Here you can see the completed PCBs with the newly arrived T4Bs safely housed in their sockets. [/su_box]

The T4B is an optical attenuator that gives very smooth gain reduction – also found in the Teletronix LA-2A. The LA-3A is similar in many regards to this unit except that it is classed as solid-state – it doesn’t contain any valves (tubes for those of you in the states!). 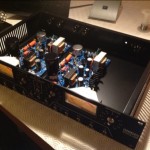 Here you can see the rough placement in the 2U chassis – not an awful amount of room over the T4Bs! Here you can also see that I have connected the VU meters from Hairball Audio – the same ones used in the 1176 clones I have built before.[/su_box]

The below picture shows the first stage in the hookup.

The most important bit was connecting the power transformer visible at the back-right of the picture – it needs a different configuration for 230V operation in the UK so I took my time! The input IEC also needed to be connected to the power switch at the front – this is the one with the brown IEC cables connected to it in between the middle two pots on the faceplate.[/su_box]

The major annoyance during this part of the build was that the connections from the pots and switches on the faceplate were to molex headers on the PCB that needed crimps attaching to each wire – no mean feat considering there is a total of  around 60 connections! This does make sense in the long run though – I had the pots wired backwards and the molex headers made changing them round very easy indeed – no need to re-solder the pot in a already cramped faceplate! 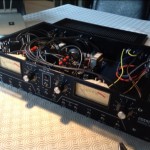 Here you can see the finished product. [/su_box]

The unit powered on with the first attempt and after calibrating it a few tentative test were carried out with some drums tracks and vocals. I tried an old favourite trick: sending the vocal through both units in series, setting to limit and aiming for 1-2 dB reduction on both. The result – smooth!!

I threatened at the end of one of my posts on DIY that now that I have caught the self-build bug that there were several choice units on my hitlist, namely the LA-3A. Well here we are – built in around 3 days and now racked and ready to go – why not book a session in with your band and come and hear it in action!